Edinburgh to Isle of Skye, Scotland

What a wonderful adventure it is fro Edinburgh to Isle of Skye in Scotland.

Here’s a two-minute snapshot of life in the Scottish Highlands for a bunch of travellers on board Haggis Tours….

Edinburgh to Isle of Skye

“Do you trust your Uncle Chris?” Our amusing guide’s dulcet tones broke the silence, rousing us all from a coach-induced delirium. “Yes,” we smiled and nodded, wondering what was coming next.

“Right then, close your eyes. Close them tight, and don’t open them until I say. I’m going to tell you a story…”

A mild objection rose from the group, because at that point we were cruising throughout 360-degrees of picturesque landscapes: vast lochs, dense green terrain stretching skywards, mysterious clouds looming across the cliff-tops, the stuff of films and television − how could we look away?

“When I was little,” he continued, “My Uncle Harry brought us along this route on a family outing; he requested the same of us, and as we trusted him, we kept our eyes closed… I see you all trust me, well, except for you two in the front seat. Don’t think I can’t see you.” We giggled but kept our eyes shut (well I did anyway), as Chris proceeded with one of his wonderful tales of adventure and revelry.

Just as I was pondering how much of Mother Nature’s spectacular show I was actually missing despite being thoroughly immersed in Chris’ story, his tone notably edged towards a climax, as the coach simultaneously stopped. “And then my Uncle told us to turn our heads to the right, and open our eyes NOW.” 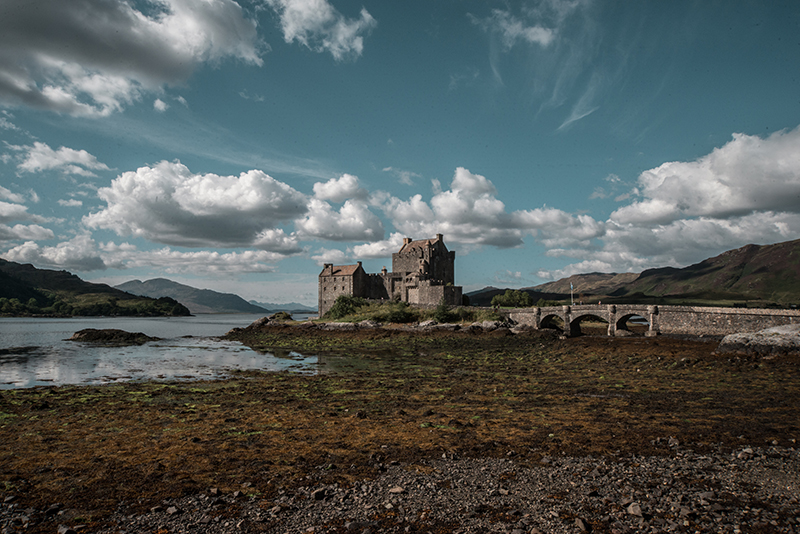 As forty odd heads shifted to the right, and our eyes snapped open in anticipation, we all gasped at the surreal scene, for in front of us, perched in the middle of a large loch, surrounded by peaceful lapping water, a crisp breeze and dreamy mountainous landscape, was the most gorgeous Mediaeval castle most of us had ever seen − in real life, at least. It was a scene we had envisaged when choosing this Haggis Tours Skye High expedition, and there it was for the taking.

Eilean Donan Castle, originally built in the 13th Century, but lovingly restored over the years, familiar to a few as it has been featured in various films and photo-shoots.

This wasn’t the last castle or set of romantic ruins we would come into contact with on our journey further into the Highlands of Scotland, and even though the landscape varied from lochs and mountains, to desolate, craggy regions featuring jaw-dropping sheer cliffs dipping into the icy ocean, it was all magical − everything I’d hoped.

The Isle of Skye itself is all dramatic landscapes surrounded by sea and boasts Scotland’s oldest and youngest mountains. A geologist’s dream, with something different to discover on each and every journey.

I was more interested in the folklore of the place − and yes, stories of faeries, princesses, monsters, romance, battles and betrayal run rampant in these parts.

Fortunately for us, Chris is the very best, most passionate story-teller I’ve ever met, and his enthusiastic accounts − of history and mythology − had us enthralled for hours. His accent didn’t hurt either (notably the Scottish accent usually ranks within the top three sexiest in the world… according to Google (and a little of my own research)).

As we edged up a steep hill, ocean and windswept cliffs drew further behind us and fields of green with odd-shaped mounds emerged in front (as pictured above). Chris explained we were about to discover a sublime little place called Faerie Glen. As I happy-danced gleefully in my mind (anywhere called ‘Faerie Glen’ had to be amazing, right?), he recounted a ‘faerie-tale’ about a young prince of this world, and a faerie princess who fell in love many moons ago.

Of course, they could never be together, but the faerie king granted them a wedding plus one year and a day together. Sadly, that year passed all too quickly, and as they parted ways, broken-hearted, the faerie princess handed her true love a special faerie flag blessed with protective powers. This flag is said to have been used by Scots in the past, and indeed it has protected them.

Allegedly, some Scottish soldiers even took the flag with them into the Great War and were the only men in their group to return. While we didn’t actually get to see this charmed flag, we were privy to the home of the faeries. 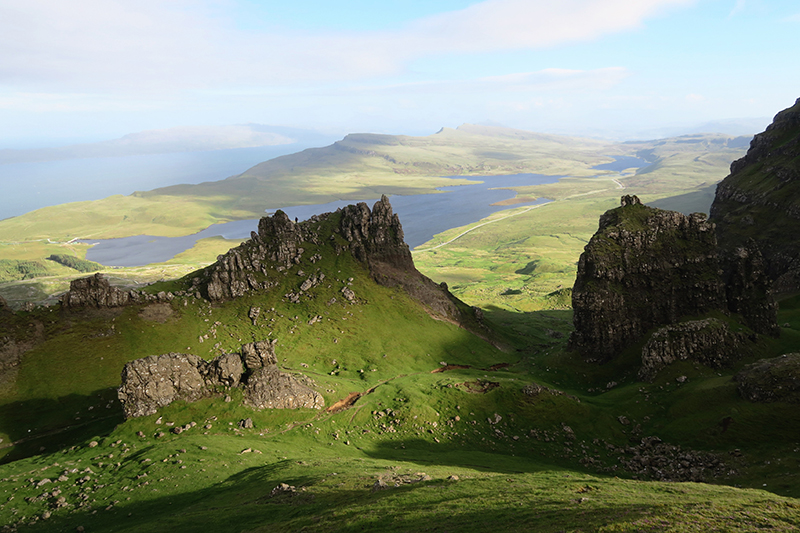 Faerie Glen is a marvellous green, hilly landscape with hidden surprises − like waterfalls pouring from cliff-tops − emerging around any given corner! It’s said, if you need help with anything important here in the human realm, if you close your eyes and walk around one of these ‘faerie mounds’ seven times, a portal of light will open up in the heather and take you into the faerie underworld.

But, beware, for time passes quickly in Faerie Glen’s underworld, so if ever you are to meet a faerie here, or seek help below, your notion of fifteen minutes could indeed be seventy years ‘up here’.

This trip was more than just sensational scenery (which would have been enough); we also learned about Scotland − history, conflicts, tumultuous relationships with neighbouring England as well as between clans.

In fact, if you’re a Campbell you’re not welcome in some of these parts to this day! We of course gained knowledge of other intriguing lore… and a little background in something very important to the Scots, whisky. There are indeed many wondrous, historical and interesting elements which come together to colour contemporary Scotland.

Evidently Scotland is home to numerous renowned features, but none more famous than Loch Ness and its notorious monster. This particular destination has been on my bucket-list since childhood. My brother, Josh, and I were both fascinated by this legend when we were young, and he managed to visit ten or more years before I made it to Loch Ness.

I’d always treasured a little Nessie figurine which Josh had bought for me, and was particularly excited to finally dip my toes into the choppy waves of this spectacular body of water.

Loch Ness is massive. It contains more than twice the water England has within all of its lakes and catchments. It’s also dark under the waves, in fact, it’s pitch black at 10 metres below.

Unexplored lava caves and tubes lead off the loch, and sonar navigation systems have detected unnaturally large shapes swimming in the depths. Basically, there is a lot of space and much scope for a monster − or monsters − to hide.

Many do believe in these monsters, and if we can appreciate anything from history, it would be that while someone may seem mad for their beliefs, it does not mean they are incorrect. Did you know that scientists understand more about the surface of the moon than about the depths of these waters? Which is why believers insist yes, the monster is possible. 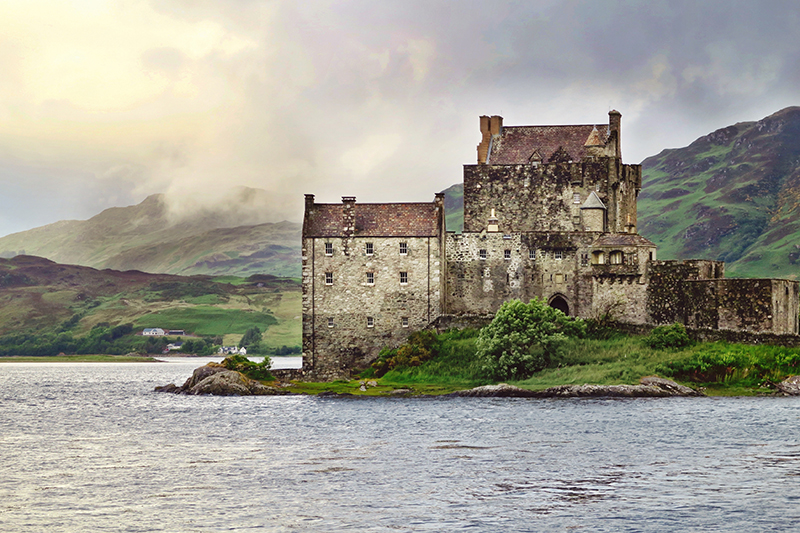 While the earliest report of a monster sighting associated with this area dates back to the 7th Century, modern documented sightings started in the 1930s, with the most famous picture, known as ‘the Surgeon’s Photograph’, snapped in 1934. A hysteria built around the story which continued into the 1950s, and while that has calmed, even to this day there is a policeman in Inverness (a city not too far up the road) who is tasked with the job of recording sightings.

Nobody knows whether Nessie is real or not, and that’s part of the mystique and allure of this story. There are things in Loch Ness; there are dangerous things − this is a fact. But it is the monster that makes it legendary.

From the captivating cliffs of Cuith Raing, sheer drops and waterfalls crashing into the ocean around Kilt Rock, to magical bodies of agua promising eternal youth, and the character of one of the world’s most delightful cities, Edinburgh: this Scotland and Isle of Skye journey is certainly one that leaves a happy traveller wanting more.

I discovered a blog by ‘Rachel in London’ who experienced this trip in 2009, and I feel she captures my feelings with these words. “Jane Austen’s book Northanger Abbey sums up perfectly my whirlwind of a weekend touring Scotland and the Isle of Skye:

‘If adventures will not befall a young lady in her own village, she must seek them abroad’.”

Go seek your adventure, and if I can impart any advice, seek it in Scotland.