Ten months ago, my Mum, Cooper and I found ourselves in a sleepy suburb outside of Brisbane, surrounded by a squeaking pack of tiny Westie puppies. It was a far cry from where we expected to be in December 2020. I for one fully intended to be at a nice crisp German Christmas market, sipping on mulled wine and impulse buying sparkly decorations that I had nowhere to display.

But, surrounded by these white creatures that more so resembled tiny polar bears than Westie puppies with their eyes barely open wasn’t entirely bad either. 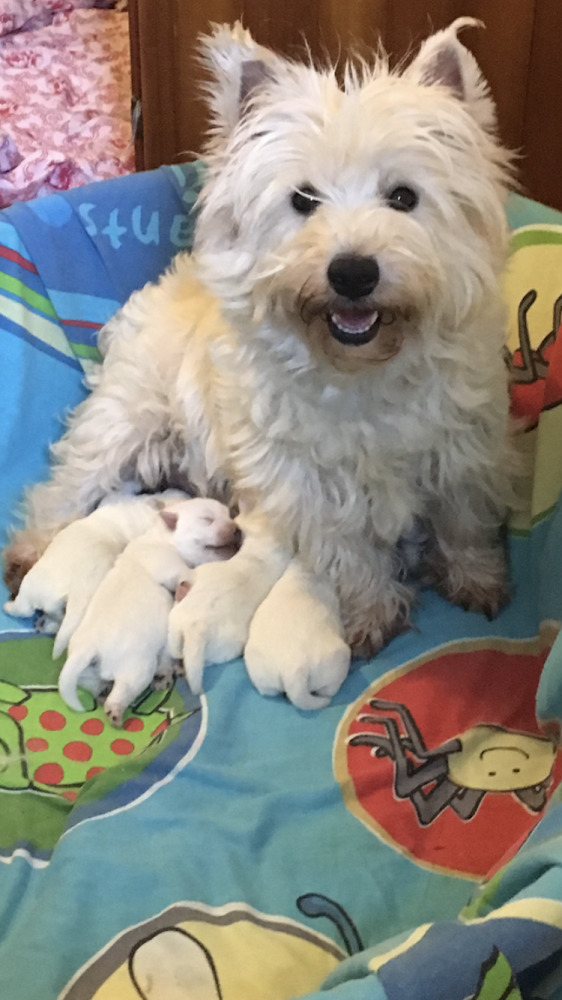 For the love of dog

One look at all of our past content here and on YouTube, and you’ll spot a mile off that Cooper and I are “dog people”. Not part time or casual dog people. Oh no. We are those all-in-totally-obsessed-heart-eyed weirdos who quite literally would follow a wagging tail along the road, through a shopping mall, down a commuter platform and onto a train if it meant we could have just one pat.

If that sounds insane to you, maybe you better go find another post to read 😛

As long as Cooper and I have known each other, we have loved dogs. In fact, I recall the first time I thought Cooper (my co-worker at the time) was “sweet” was when he stooped down to kiss one of our mutual friends’ dogs on the head when he met it.

“That’s so sweet,” I thought…and looked at him kinda differently after that.

Jumping forward a few years, we had two blue cattle dogs in our lives. One, Stephanie, my beloved childhood pet who moved with me to a small rural town in NSW where Cooper ended up befriending her and giving her a roaring good time in her twilight years.

And the second, Harry (pictured above), another bluey who was quite simply the best dog you could ever, ever know. He loved us and we loved him with all of our hearts. Everyone loved Harry – he was a popular family member with all relations and friends. He had his own identity and personality. When you imagine the “man’s (or woman) best friend” analogy of a dog and their human living their best life, together, Harry is the dog in that picture.

That rainbow bridge, I tell you, it’s a wonderful place with all our four-legged mates chasing their tails and their tennis balls, just waiting for us on the other side.

But of course, there’s that time in between. And ours was spent living abroad and travelling. We were always dog spotting and stalking puppies in the park – well, everywhere really (pubs, trains, cafes, courtyards, the workplace…). The time was never right for us to get a dog when we lived in London. We did however, sign up to be Trusted Housesitters specifically to get our dog fix and give love to fur babies in the absence of their own humans who wanted to get away on a holiday somewhere. 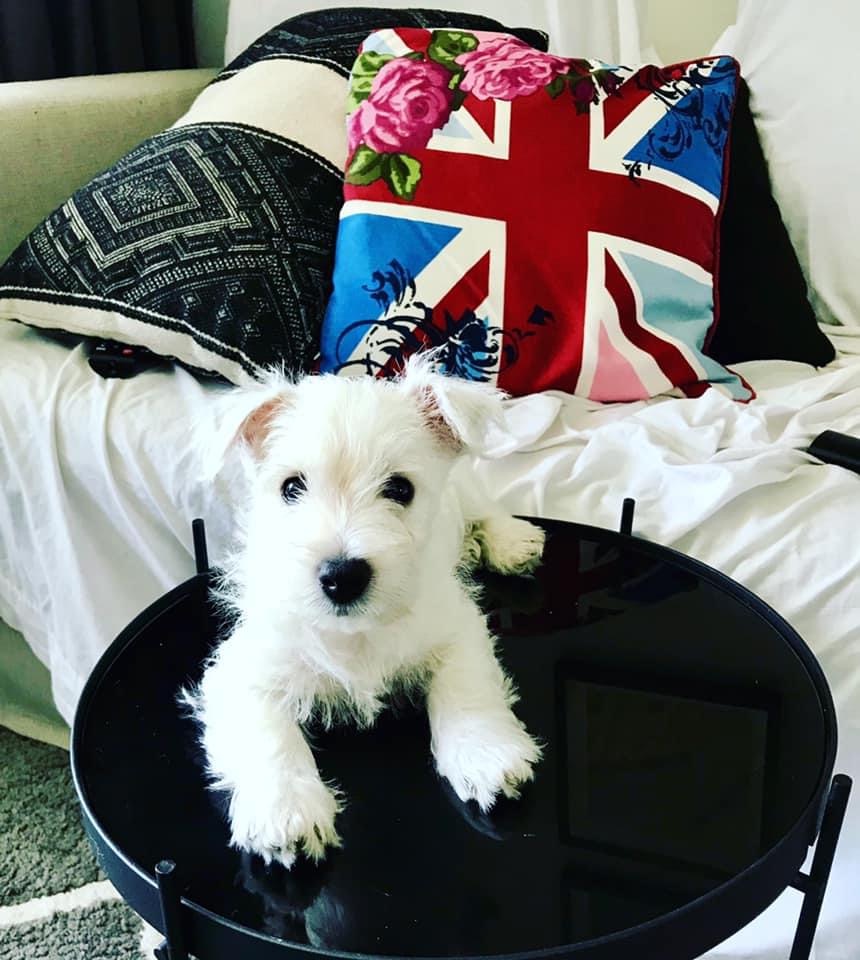 Which brings me back to being surrounded by Westie puppies…

Since we had to leave London for now, and with so much loss experienced over the past year, we decided that it was time to bring in new puppy joy. (Well, when I say ‘we’, I mean I kept shoving the newborn picture of our future Westie pup in Cooper’s face until he said ‘yes’ :).

We couldn’t get a bluey again based on our apartment living requirements, so we set about searching for a breed that we feel is quite similar in personality: the West Highland Terrier. Maybe it was sentimental – Westies had been the first breed we pet sat for in London; or maybe it was always meant to be, but we decided to give raising a Westie a go.

That day surrounded by Westie puppies, we made our choice: not the loudest pup, and not the quietest – the one in the middle who did seem content enough with us gently picking him up and having a chat with him about his future. 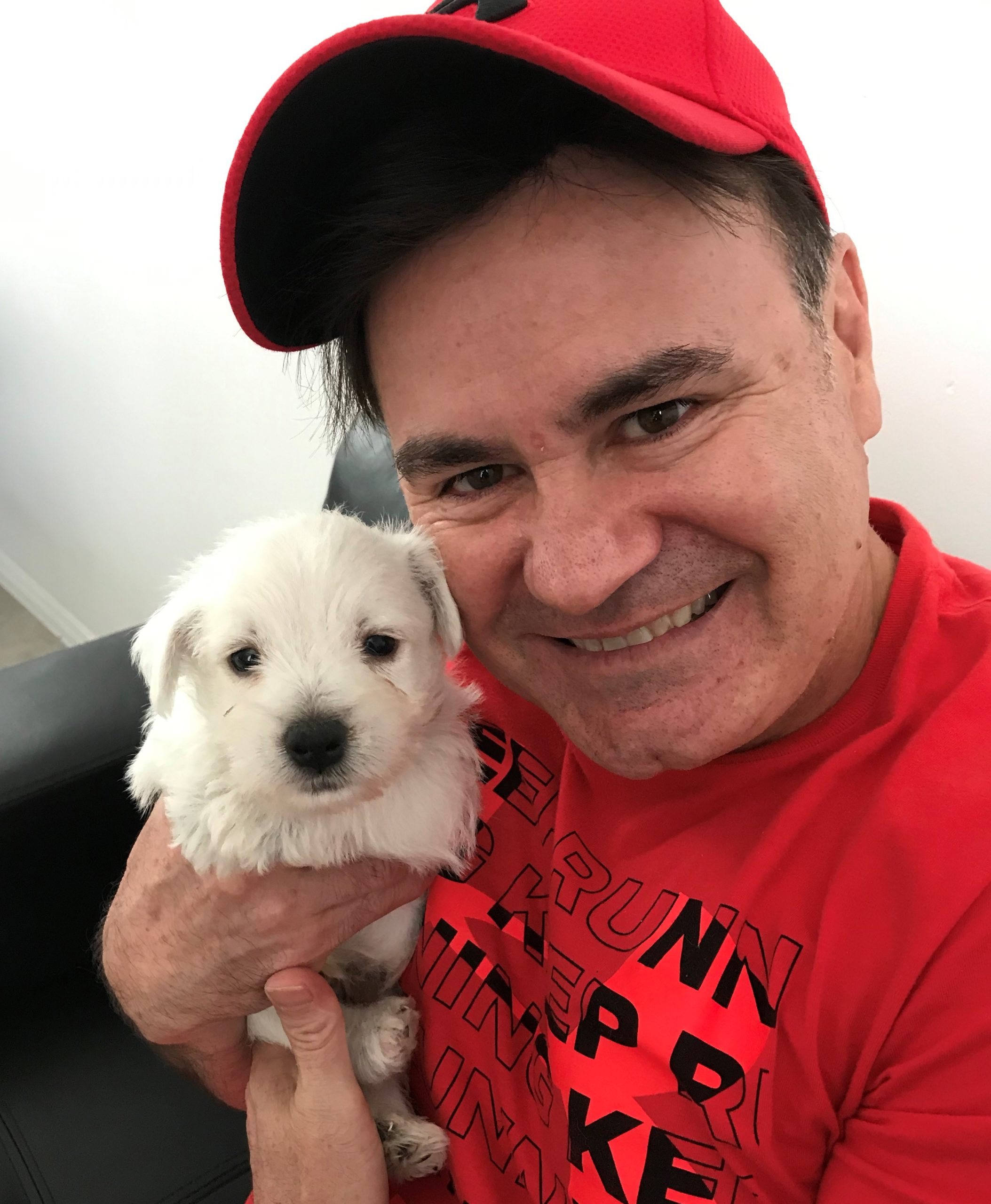 What did we learn about Westie puppies?

Well let me tell you, Westies, they’re not the same as cattle dogs 😂 In fact, we’d clocked early on – at about 9 weeks old – that our little Westie puppy, London (named after our beloved adopted home in England) had no intention of listening to anything other than what pleased him. Our vet even said to us, “yeah, he’ll never be obedient like the cattle dog”.

‘Westitude’, we later discovered on a Facebook Group full of Westie owners – is an actual thing. Defiant, belligerent, obstinate.

But oh my God, he’s just the cutest little defiant, belligerent, obstinate thing we could ever know!

Also, we are kind of in love with him, which is evident by the fact he has nine places comfortably laid out to sleep at home (in a one bedroom flat!). We also bought a doggie cam so we could check on him and make sure he was ok and not fretting when he was a little pup. Additionally, London  has the luxury of attending doggy daycare during the week to keep him happy and social.

If you’re considering the journey, go for it. These are the funniest little dogs you’ll ever meet! Actually hilarious! But here are my top tips based on our own experience:

A future world with our Westie

As London grows, he is gradually shedding some of the puppy Westitude. He wants to hang out with us more and do dog things … like we remember dogs do. He’s brought so much fun and laughter though, and reminds us yet again of the value of dogs: they are pure joy.

He is certainly part of our pack now. Or perhaps, it’s us who are in his.

We can’t wait to see what the future holds: adventures with London in London, perhaps?

👉🏻 Read our popular post about pet care while you’re away, and house sitting as a way of travel or to take care of your own fur baby.

Do you have a question about raising a Westie puppy, or have a story to share? We’d love to hear from you! Let us know in the comments below.