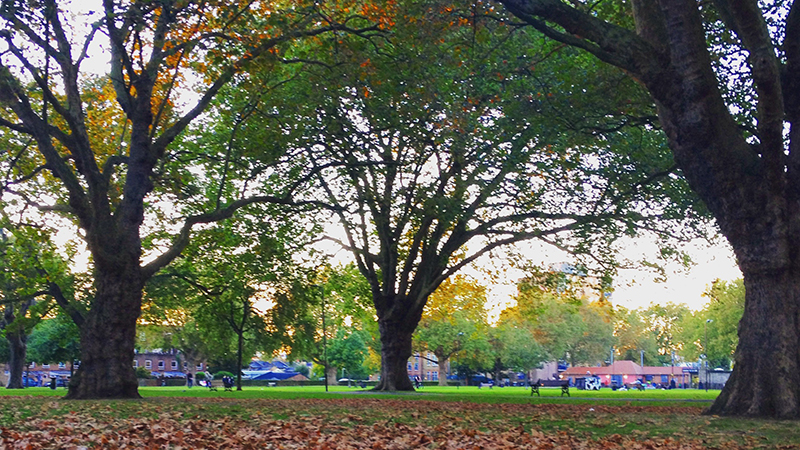 Just another weekend at Broadway Market

I recently wrote about YouTube and how to make the most of your user experience by signing in. This is because we’ve been spending a bit more time in this space recently.

We’ve had requests from family and friends in Australia to show a little more about what our lives look like over here, and across the summer Cooper’s been brushing up on his video editing skills.

We’ve got some more fun vlogs on the way soon (super excited to share with you what Christmas in London looks like!).

In the meantime, here’s a sneak peek into what some of our Saturday mornings look like at Broadway Market in the east… 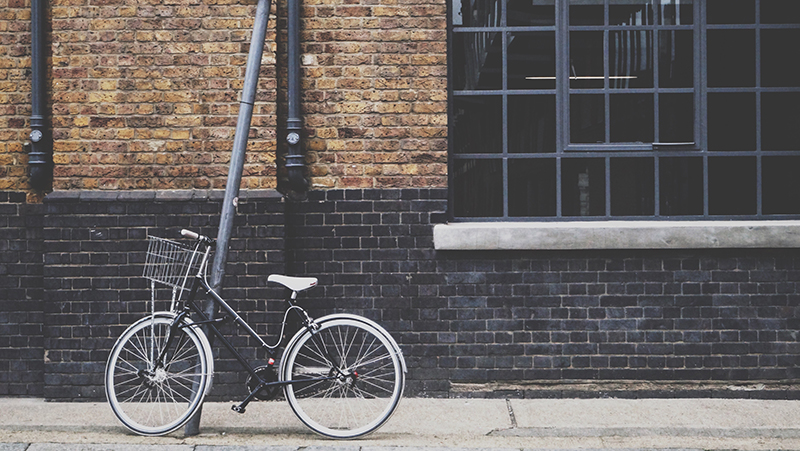 Ask and it is given: law of attraction stories

I realise I’m a little slow off the mark, compared with a lot of people who have no end of law of attraction stories. I’ve just discovered the ‘Law of Attraction’, via an amazing book (bible?) lent to me, Ask and it is Given by Esther and Jerry Hicks.

Evidently it’s all similar or the same principle as The Secret which was huge a few years back. Indeed the law of attraction stories in there were inspired by Ask and it is Given (you’ll need to listen to some interviews with the Hicks’ to find out more).

I’m learning in Ask and it is given that if we’re guided by how we ‘feel’, that we have the best chance of following our true paths. There are many, many inspiring law of attraction stories out there (and now, on this blog, like here and here).

When we feel great, as in, we feel/know things are right, then ultimately we’re doing the right thing and are very ‘connected’ with our source energy.

Law of attraction stories: the feeling of ‘home’ or belonging

I remembered how every day here I felt happy. From the moment the flat ‘found us’ by chance, the energy in the neighbourhood felt right. It was the law of attraction. It’s a law of attraction love story!

I loved walking in that gate every day, loved the little flat, adored the park, markets, shops, dogs in pubs…

Every moment felt right, and leaving felt so wrong, to the point where I know I wasn’t meant to leave (at that time, anyway). Life was ‘right’.

The energy was flowing and I was meant to be there in that place at that time; perhaps in another life, I’d be there for longer.

Given these kinds of situations then, how do you get that feeling back?

How do you make another situation ‘right’?

Not that I’m unhappy with my lot (on the contrary, I realise I’m one of the lucky ones), but curious – anyone got any insights?

What are YOUR law of attraction stories? Let me know in the comments.

PS you might be able to tell from the newer posts in this blog – my law of attraction story ended up pretty great, because a few years later I’m back living just two train stations away from Broadway Market. 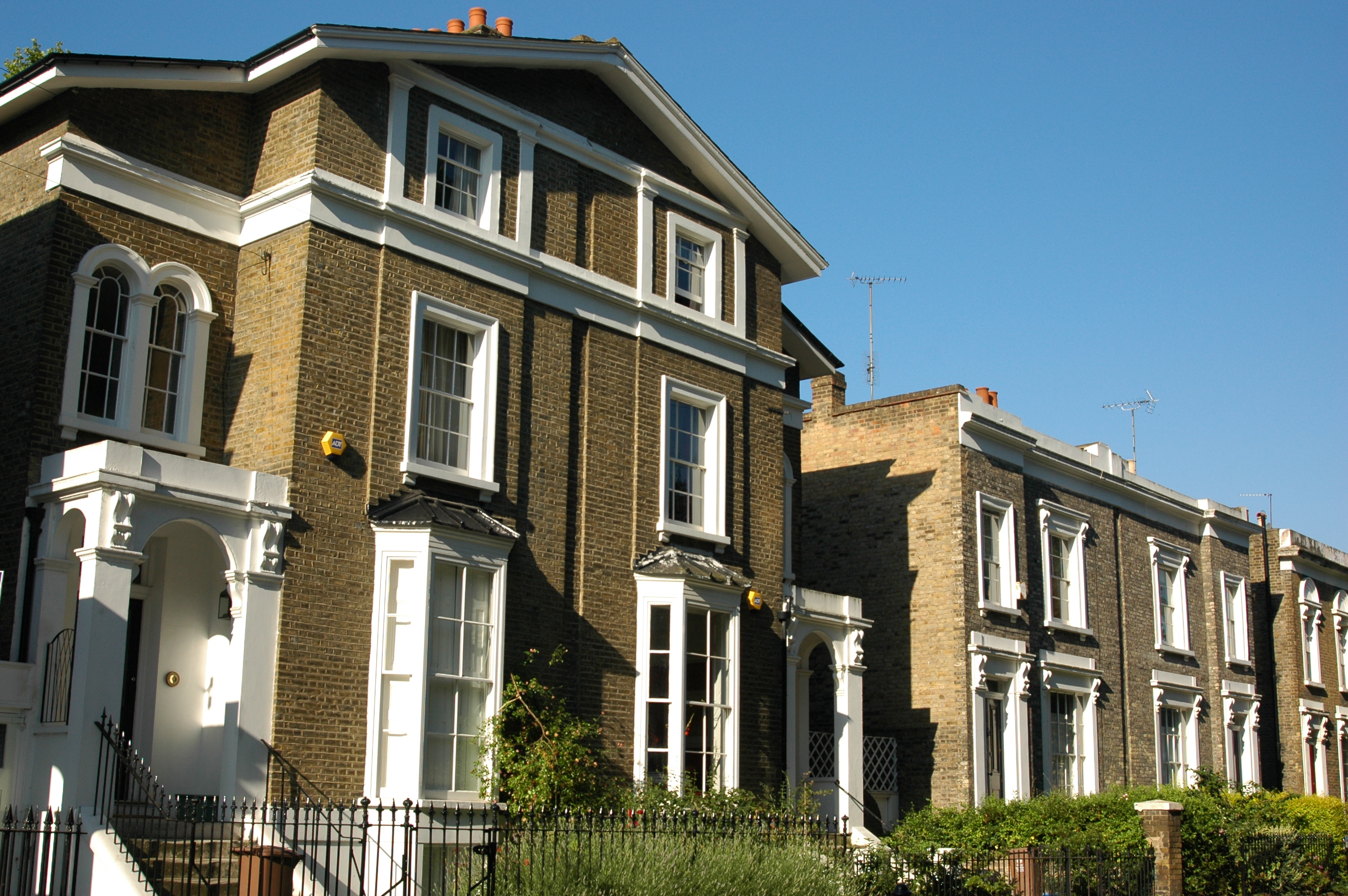 All about Haggerston and London Fields

As I walk back towards home from Haggerston station after seeing my love (that would be Cooper) off to work, it occurs to me that I probably have very little time left in what has become my new home. Saddened by this sudden realisation, I stop mid stride to take a look around, attempting to record it in my brain. It’s quiet here this morning, all except for a soft breeze and the sound of the 7am trains pulling in overhead. A black and white cat appears by me in front of the Duke of Wellington pub where I’ve paused. She stops to peer up at me as if to assess whether I’m friend or foe; we eye each other for a moment before she nods nonchalantly and proceeds with her morning’s exploration. Going home won’t be all that bad, after all, I get to see my dog again. We sorely underestimated how much we’d miss Harry, ‘our child of nine years’. I’m not a ‘cat person’, but here I’ve even begun to develop a soft spot for these slinky little animals – they’re furry and occasionally friendly – anything to remotely fill the ‘Harry void’. We’d fly him across from Australia, but he’s been in a good home for the past eleven months and we simply couldn’t put him through a long-haul flight and possible quarantine, especially now that he’s in the later stages of his life. So, we’re back to going home. I shouldn’t be sad, we (hopefully) have travelling time ahead of us yet, but I am teary at the thought of leaving this place, my new home where I’ve happily and peacefully settled. 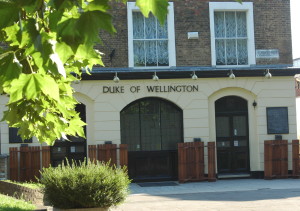 Snapping out of my thoughts as I notice a park-dweller glaring suspiciously at me, I continue on my way. Crossing Queensbridge Road onto Middleton Road, I take special note of the buildings, developed, I read, by Sir William Middleton (a relative of the new Duchess of Cambridge, aka Kate, I’m assuming) at the beginning of the 19th Century. I enjoy walking in this area past these beautiful Georgian period homes that lead into lovely London Fields. Although I know there have been issues with gangs at times in the past, in my experience here I’ve just seen people having fun, BBQs in the sun, dogs playing, Broadway Market action and a generally great vibe and energy that’s made us both happy. Usually we rush about, but in this area we tend to stroll and take in the environment, patting dogs, making friends in the bars and admiring the old architecture of surrounding homes. 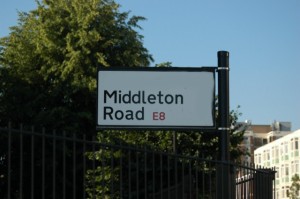 No point in being miserable about leaving though, because life goes on, and as far as ‘problems’ go, this isn’t a critical one by any stretch of the imagination. I’m just a sentimental girl (especially when I read my posts from this time last year, as I prepared to journey over here to the ‘Mother Land’ /unknown territory); but I realise I’m lucky to have had the experience in the first place. It’s not been perfect or entirely as I would have imagined, but we’ve settled, lived and conquered London – something I never envisaged as being possible.

Just as I open the gate to our building I see a tiny ray of sunshine finally poking through the clouds following weeks of wind and rain. Hopefully we’ll have some nice days between now and when we leave. With that in mind I’ve resolved to spend some of my spare days recording what it’s like on any given day at the precincts that make this city tick – at tube / train stops around London – stops that act as vital arteries to this city’s existence. Landmarks that see thousands of commuters pass each day, for work, travel and leisure. I want to record what it’s like to sit and watch the Thames in 2011, or what the townsfolk are doing within historical Covent Garden or down by St. Paul’s. I’ll stop at train stations to capture their activity and reflect on what might have been going on there in the past. Each stop in London offers new and exciting parks, pubs, restaurants, cafes and hidden old gems, and being that I’m a tad obsessed by The Tudors at the moment, this seems like a fitting and worthwhile pastime, and conclusion to life as we know it in the UK. Who knows, maybe one day I’ll have the opportunity to come back and compare my musings at some crazy future date like 2031 (if the world doesn’t actually end next year, that is). Or perhaps, as others have come to England and followed in the path of Wordsworth, Shakespeare and Austen, maybe some soul who is a youngster this year, will follow in my steps and add their findings to this entry in the future. Who knows how it will have changed. I do hope the old homes are here though, and I would certainly assume that the Duke of Wellington pub (the same place we saw the historical Royal Wedding of April 29 take place) would still be standing… the pubs always are! 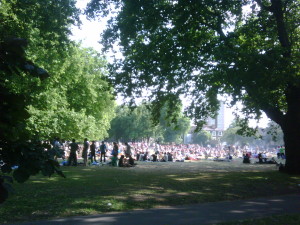 To the east we go…

Now for a change of pace – we’ve moved! The tiny one-room studio in Bayswater served its purpose, but in the end the noise, inconsiderate neighbours and claustrophobic environment took away from the fun of living in London. I sit now instead, gazing outside to a cute little garden and elegant trees (still standing without their leaves). There’s a bird hopping around in one of them, taking advantage of the last vestiges of blue skies and sunlight we’ve enjoyed this late weekend in March. This is the scene I’d initially imagined I’d be looking out on when I moved to London – I suppose it was fairly naive to not have considered dirty concrete ledges and walls would be the obvious option… nonetheless, I think I’ve now found a place of London solace.

After an extensive but disheartening search of rental properties all over London, last Sunday I put in one final effort and discovered a private property via Gumtree.com, located in an anonymous but ‘popular and convenient precinct’. The ad had only been placed online minutes earlier, so we took the chance and called. By the time we came to visit the newly refurbished one-bedroom flat, the lovely landlord had already arranged for a few others to see it. Turns out the flat is off her home, she has a dog (yay!) and the area is gorgeous – very homely, clean, with a vibrant park up the road and minutes from the busy, chic and entertaining Broadway Market which we discovered yesterday.

Despite moving, we’ve had a lovely weekend exploring our new surrounds. It’s a tonic to have a little more space to move around in, along with engaging and inspiring environments to live amongst. There are dogs everywhere (our kind of scene), and yesterday in the pub people even spoke to us – that didn’t ever happen in the middle of ‘town’!

The sun was shining and literally hundreds of people were sitting in the park, staring up at the sky in awe. I must admit, Saturday was a lovely day – for more reasons than one. We feel like the draining energy of London-town has lifted, and we’re excited by the beginning of a new chapter of our life located in this new and fabulous precinct we’ve found.