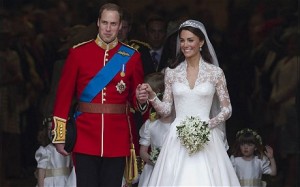 Just this morning I was pondering what we would do now; what would we talk about? This time a week ago we had the big, romantic wedding and street parties all around. Then the weekend was topped off by the news that Osama Bin Laden had finally been captured and killed.

Ironically enough, I stumbled across quite an amusing editorial in The Daily Telegraph by Hannah Betts which proved I wasn’t the only one thinking along these lines. It really was such an amazing event: “For a few hours we came together as a country in a way that no sporting activity, or religious celebration could muster. In a multi-media age, where the populace rarely views the same subject matter, we united on a single theme“. Am sure quite a few of you will, with a knowing smile, agree…

Have you fallen into the arms of post-wedding-day blues?

After celebrating the royal wedding our nation is left deflated, says Hannah Betts.

Look deep into your soul and ask yourself: do any of the following symptoms sound familiar? A wistful longing for romantic conviction; the feeling that one might be a tad chubby or lacking poise; an overwhelming sense of drabness; an indignant rumbling to the effect: “Where’s Monday’s bank holiday gone?”

One week on from what the nation is still rapturously referring to as “The Wedding”, a certain post-nuptial depression would appear to be afflicting the collective female psyche. Ladies and gentlemen, I give you The Great Wedding Wobble.

Personally, I am no ardent monarchist, without being a republican; I am not looking for Mr Right; nor do I believe in marriage. Nevertheless, my own wake o’ nuptials malaise set in last Friday at 4pm prompt.

What, no more watching royals motor about the capital? No further tittering at Beatrice’s titfer? No more fashionable nose-upturning at the former Miss Middleton, who – even former naysayers must concede – pulled an absolute blinder? How could we be expected to wean ourselves off the eye candy so quickly? Surely the couple had a responsibility to fulfil their role as reality television stars to topple Essex’s finest and commit their wedding night to the small screen?

The male commentator who described the wedding as the “World Cup for women” didn’t come close. For when has the outcome of a football match made anyone question their quality of life? The introspection – ye gods, the introspection! I may not want to get hitched, but the couple’s beatific happiness (after 10 years!) reduced me to a gibbering heap. Theirs was a radiant certainty that I have yet to feel about anyone or anything.

Happily – unhappily – I am not alone. Legions of otherwise sane women would appear to be suffering post-nuptial angst. For those enduring separation or malcontentedly single, the wretchedness is palpable.

Said one 38-year-old divorcee: “I couldn’t help but reflect on my wedding day and the confident assumption that my life was complete. And yet here I am living alone in a bedsit, with unhappy children and an incandescent ex. The pair’s tangible warmth crawled beneath the armour I had used to protect myself, causing me physical and emotional symptoms.”

Another friend, awaiting her prince just shy of 40, admits: “It’s the first time we’ve seen a royal couple so genuinely in love and, once the excitement had passed, it was so deflating – and a stark reminder of where we are not in our own lives. It was all so damn effervescent and now life’s the opposite. To be honest, I’m a little green. They’re 10 years younger and have a happy road ahead, whereas they’ve left me looking backwards.”

The image of the oh-so fragrant Duchess of Cambridge has led to some particularly self-lacerating feminine critique. As one staunchly sensible career woman bemoans: “I am (secretly) jealous of everything: her poise, having so many amazing pictures of her big day, that incredible mane of hair. I found myself in Prêt the other day thinking: ‘Well, I won’t buy the Caesar salad because Kate wouldn’t get that. Mind you, nor would Kate have that second bottle at lunchtime or go to bed with her slap on.’

“Her stellar performance has made me look at my own existence and find it wanting. Moreover, without any desire to get married, I’ve started thinking: ‘A dress with a 9ft-train really is the minimum.’”

The incredulity with which such confessions are expressed cannot be exaggerated. From our Slough of Despond we wail: “Is it only a week since Blighty thrilled to cartwheeling vergers and pirouetting plods?” For a few hours we came together as a country in a way that no sporting activity, or religious celebration could muster. In a multi-media age, where the populace rarely views the same subject matter, we united on a single theme.

A self-confessed pessimist remarks: “I had a strange sense during the wedding of losing all cynicism – and that so had much of London. There was a genuine air of camaraderie. For once we had good news – and on an epic scale.” The sense of jaundice and ennui that marks the comedown from this delirium would appear to be universal, even among those who like to be modishly countercultural.

And late 30- and 40-somethings – who prefer to imagine themselves as young – remembering Diana’s first-born crawling around in his romper suit have felt dispiritingly middle-aged. And all of us have had to face the end of that stretch of sunlit loafing born of consecutive bank holidays. “There’s simply nothing to look forward to,” comes the lament.

A nation mourns, or rather, sulks. Zara Phillips, take note.