Last week I ended up in Northern Ireland on a Belfast city break.

I was there for work but because this presented a chance to explore somewhere new, Cooper popped up for the weekend from London, along with our Aussie travelling mate, Deb.

Best things to do on a Belfast city break

Here (below) we are in a quaint alley in what’s known as the ‘cathedral quarter’, at the Duke of York pub. This lovely area is recommended for a relaxed stop on your Belfast city break. The lively banter amongst locals on either side of the alley had us all in stitches and got us in a good mood for the rest of our trip… 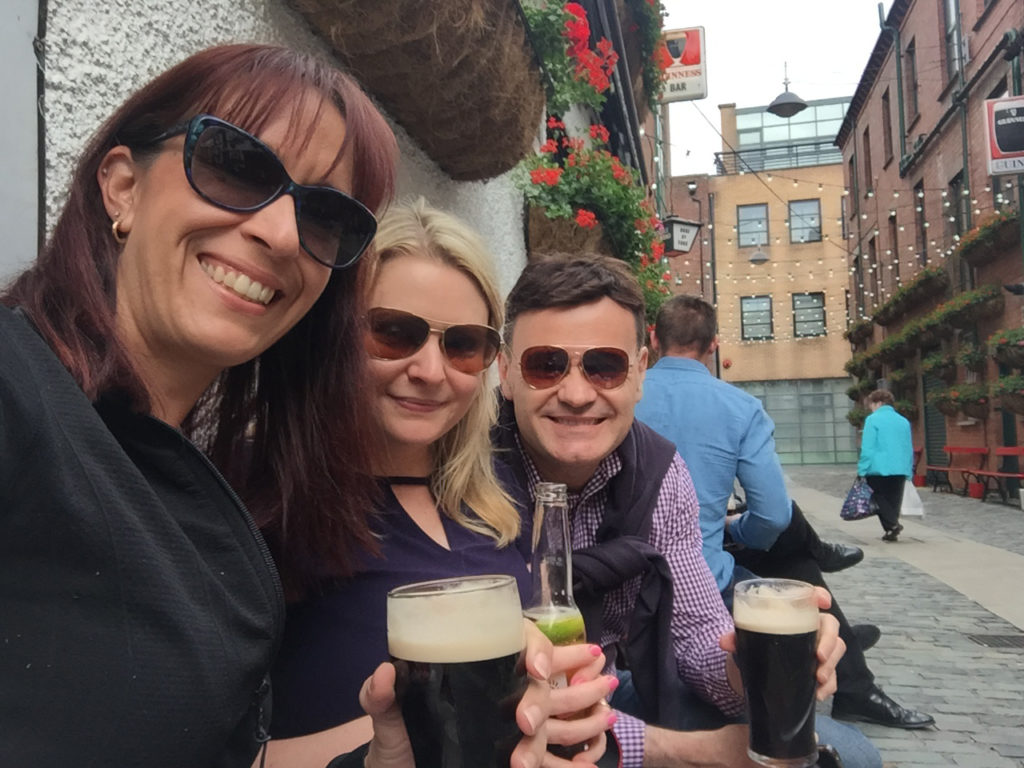 We were all aware that we should be a bit culturally sensitive in Belfast.

You see, Northern Ireland is not the same country as the Republic of Ireland where Dublin is the capital, contrary to what we might understand growing up very far away in Australia.

These are two separate places.

Northern Ireland was set up in 1921 as part of the United Kingdom (UK), pounds sterling are spent and it has its own parliament at Stormont in Belfast (its impressive headquarters pictured at the top of this page).

The Republic of Ireland (or Ireland) on the other hand, is part of Europe where you need Euros to go shopping. 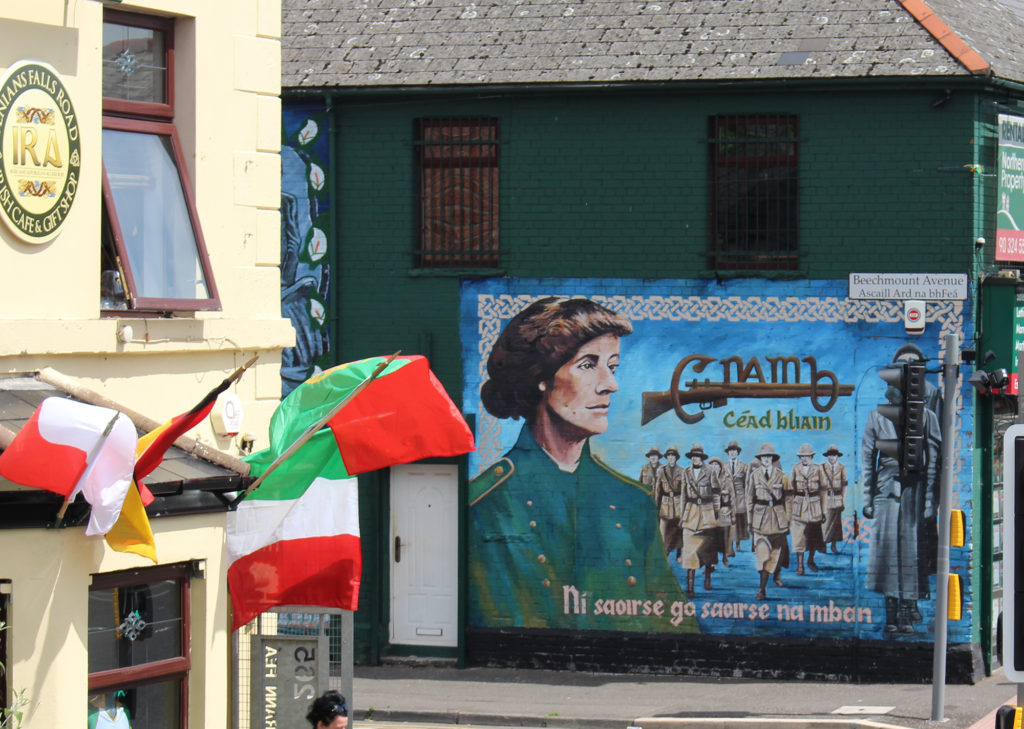 Belfast is renowned for religious and political ‘troubles’ and the initial development of ‘Northern Ireland’ was hoped to solve some of the deep-rooted problems held between Catholics and Protestants.

Unfortunately this was not to be, because many Catholics in the north wanted to be united with the Irish Free State in the south and worried about being a minority group compared with the 65 per cent of Protestants making up the region.

Over time, divisions between the two sides in Northern Ireland continued to escalate, and by the late 1960s had reached crisis levels including rioting, bombings and a serious threat of civil war.

The streets were brimming with British police and soldiers, as well as a new provisional IRA (Irish Republican Army) intent on using violence to gain a united Ireland. 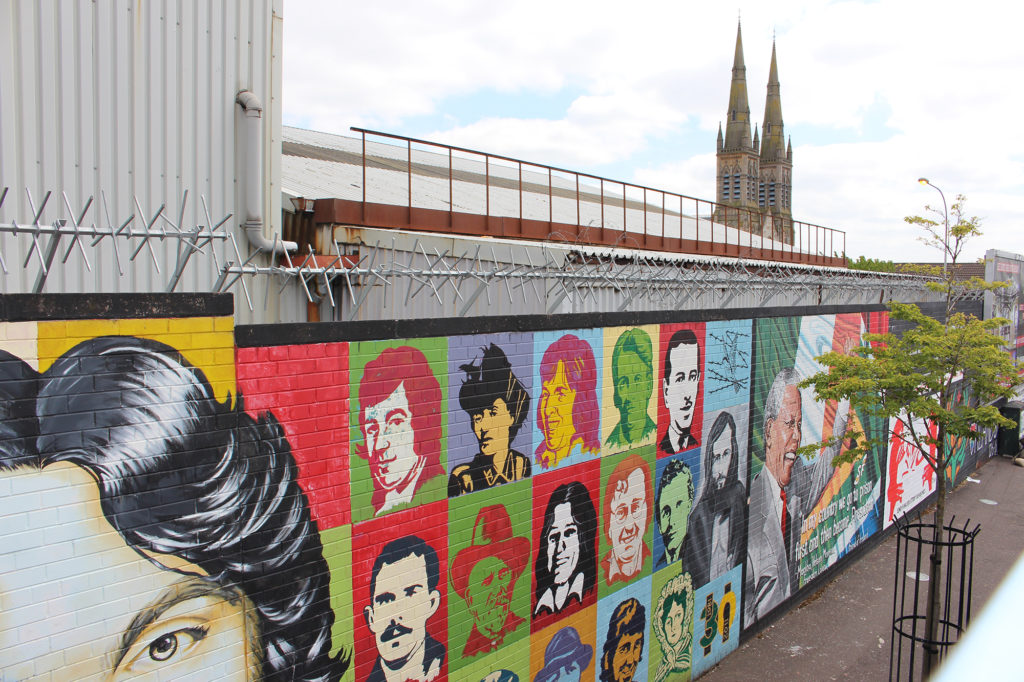 Years of fighting between Catholics and Protestants left over 3,000 dead.

Fast forward to the 1990s – the people of Northern Ireland had had enough and wanted change.

Although things were not perfect and it took a long time for the paramilitaries to get rid of their weapons, a new acceptance of peaceful ways has ensued. 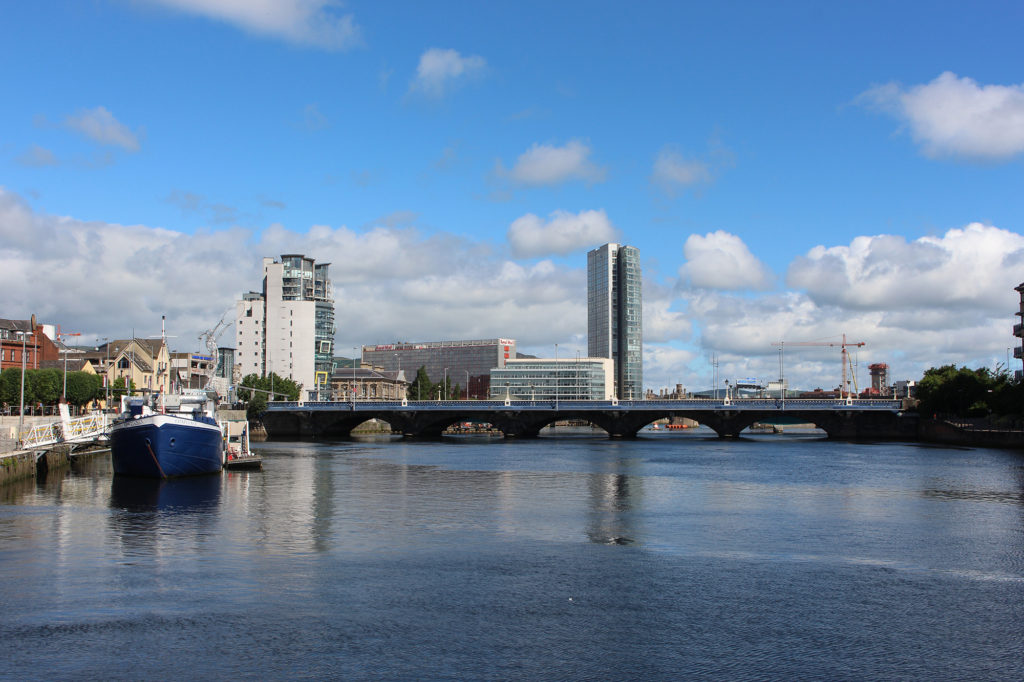 As a child of the 1980s, I remember news stories about IRA terrorist bombings and many a shooting or uprising in Belfast.

The city isn’t like that now, although its recent tumultuous history makes for a very interesting ride through the suburbs. This includes along the infamous, now mural-lined Falls Road (centre of ‘The Troubles’); and alongside the 45-year-old, nearly 8m high ‘peace wall’ in west Belfast (akin to the Berlin Wall**).

The wall was originally built to separate Catholic and Protestant neighbourhoods and runs through these parts for up to about 5km. 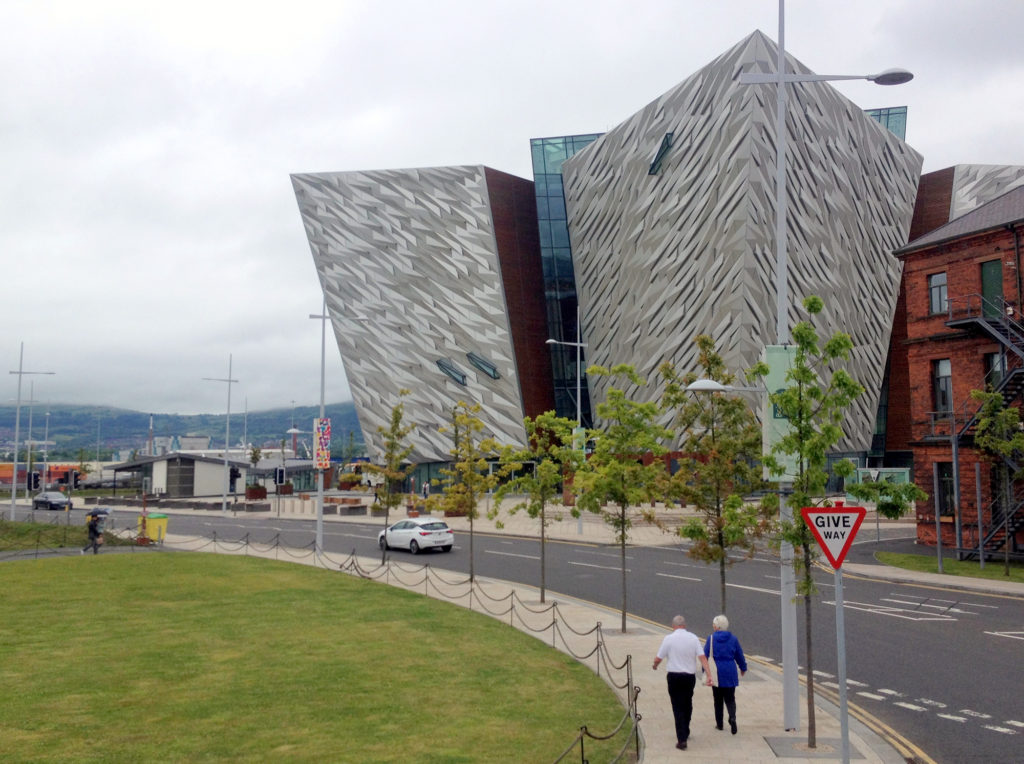 We literally only had a weekend for our Belfast city break, to explore properly.

If you’re short on time especially if you’re only in town for a short Belfast city break, we highly recommend the City Sightseeing hop-on-hop-off tour.

It is great value for a 48-hour pass and the live commentary was most informative and entertaining.

There’s also a more private cab tour that I heard about, and the feedback was that the stories told on that tour were also unbiased and interesting. 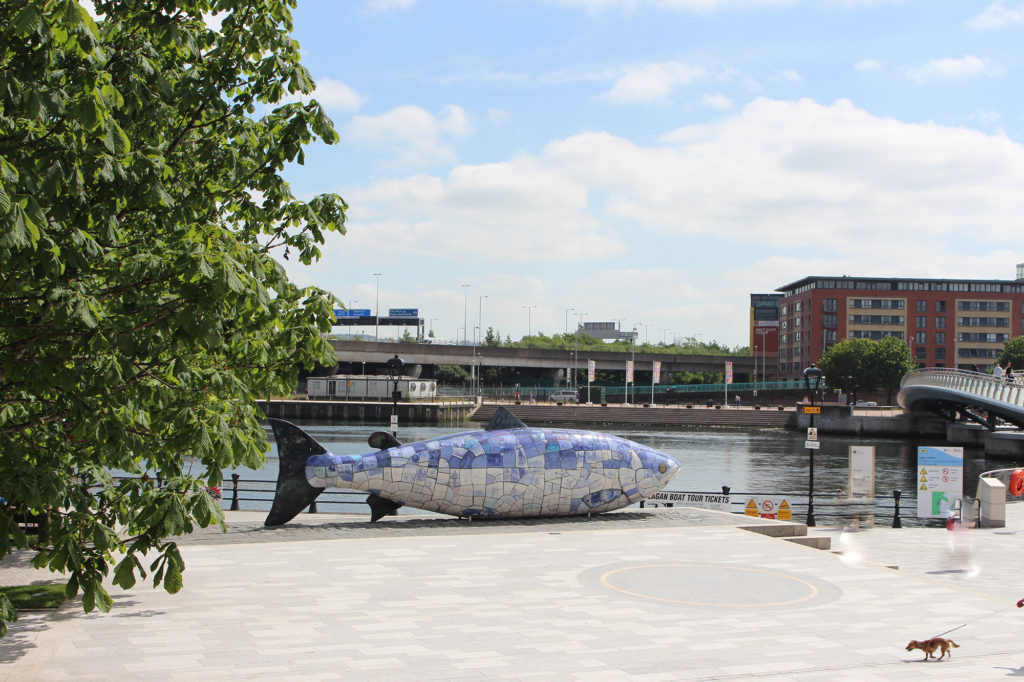 Some parts of Belfast are ten years into a 25-year planned regeneration period, including the Titanic Quarter across the Queen’s bridge from the city centre.

Belfast’s shipyards (founded in the 1860s) are where the legend of the world’s most famous ship began. Over in this part of the city you can visit the uniquely designed Titanic Belfast museum (opened in 2012), historic Titanic dock and pump-house and Titanic Studios which is home to one of the world’s most popular productions right now, Game of Thrones. 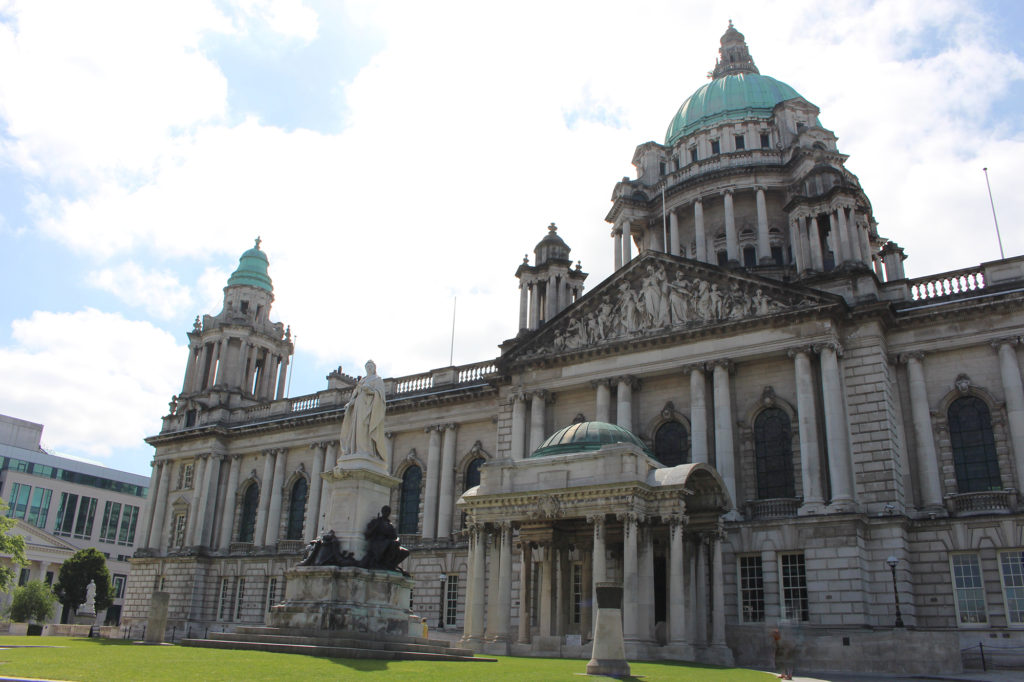 The city centre is where I spent most of my time, and I loved its contrast of contemporary and historical.

The former included a large conference centre and lovely waterfront, with the salmon of knowledge (pictured above) that you should kiss to improve intelligence… or so the story goes.

On the older side is the beautiful baroque-revival architecture of the city hall (as above), the Gothic allure of Queen’s University’s front façade, and charming cathedral quarter including St Anne’s Cathedral (below).

It’s easy to navigate the city on foot, and there’s plenty of nice high street stores to spend your money at as you wander along. 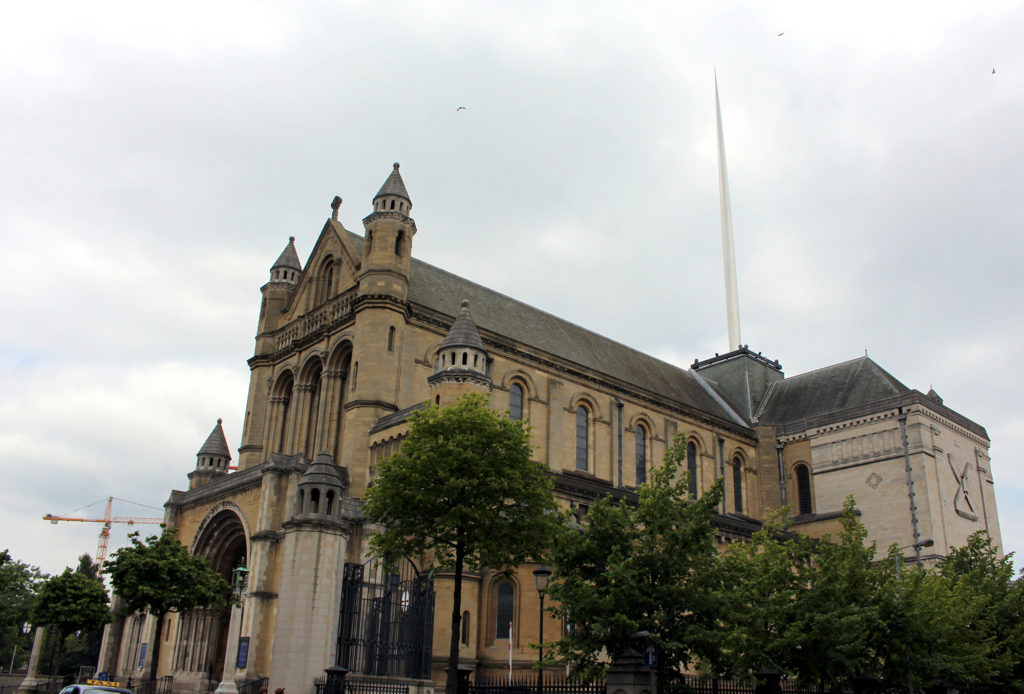 For the fun of it

As you can imagine, there’s plenty of fun to be had up here.

Some work colleagues were kind enough to share tips, including The Perch rooftop bar (highly recommended), the Duke of York pub in the cathedral quarter and St George’s Market.

Here’s a map and some more information on where to eat and drink in Belfast:

I would absolutely visit Belfast again, because there’s loads we didn’t get to explore both in the city and beyond.

Easy (day) trips to the Mountains of Mourne sweeping out to the sea, the dramatic Giant’s Causeway and idyllic Fermanagh lakelands may be organised via a base in Belfast. The school holidays are fast approaching and no doubt you’re already planning a trip with the family – but this begs the question: pet hotel, or what else to do with the fur child?

Cooper and I have had dogs most of our lives. We know that they all have different personalities and cope in varying ways outside of our company. Also, we learnt lessons from the years spent as younger, less experienced dog owners, on what is good or not so good for pets when we are absent.

Pet hotel, in home sitting or take them with you? Questions to ask yourself about your pooch:

The answers to these questions take you some way to deciding on what you need to arrange for your four-legged friend(s) when planning your own break away.

Pet hotel and dog-friendly accommodation: can you take your dog with you?

Of course, one option is to take your pooch with you and this requires a lot of planning. 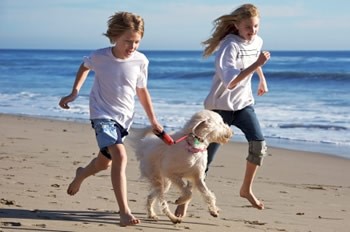 The main things to keep in mind are to book dog friendly accommodation and to choose a travel destination that best fits your dog’s breed. It might not be ideal to go hiking with a dachshund, for example. But a hotel that allows dogs (dog hotel) is perfect.

You also have to think about if you will travel by car or plane (and the high costs of the latter). Both in the car and on a plane, the dog should be in a dog crate. It will take time for your dog to get used to staying in a crate over an extended period of time, which means you have to train him/her before you go on a holiday. Travelling can mean a lot of stress for your pooch if it’s not facilitated in the right way.

Not everything that is expensive is the best option. A boarding kennel is one of the most expensive and usually least ideal options to consider (I personally have had both wonderful and terrible experiences, and it truly depends on whether the establishment is run by genuine, caring ‘dog people’ or not).

Your dog is in an unfamiliar environment with unfamiliar people and won’t get a lot of individual attention, because the sitter-to-dog ratio can be as low as 1:100. The dogs often sleep and stay in small cages. A positive however, is that your dog has a lot of friends to play with when in the running yard (assuming there is one – which there should be).

This might be the best and most trustworthy option (shout out to our family in Cairns – you know who you are). 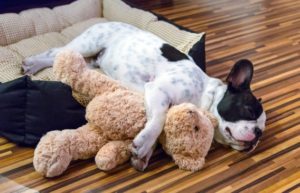 Your dog is already familiar with the people and surroundings, this means less stress when you’re away.

If your dog stays with friends or family, make sure they have their favourite toy and/or dog bed. We’d also leave something that smelled like us (eg. an old t-shirt). It only makes sense that your dog stays there if your friend or family member is at home often enough to take care of the pooch and has fun doing it.

Your dog can also stay at your home and someone comes to feed and walk him/her every day, but keep in mind that dogs can break things, tip over their water bowl, get hurt or very anxious if left alone for extended periods of time.

When your dog feels uncomfortable being in unfamiliar surroundings for a long period of time this is a good option, as long as it’s something you are happy with too.

A dog sitter will come and live in your house for the time you’re on holiday. There are many options advertised in local newspapers and online, but you’ll want to be satisfied with references before leaving someone the keys to your home.

Must read: our experience being dog-sitters in London

Dog sitting at the minder’s home

A great alternative for dogs that need that extra level of TLC, and easy to find thanks to the internet. Dog sitters are mostly passionate ‘dog people’ who currently own a dog, or who have had a dog in the past but cannot make the long-term commitment.

As you can meet the minder prior to committing, you’ll have the peace of mind in knowing your dog is in good hands. There’s plenty of services we are aware of, like Borrow My Doggy in the UK, or FindADogMinder.com.au in Australia, where you can even choose the kind of property your prefer for your pooch to hang out at, and all minders are insured and screened too.

Do you have tips, thoughts or suggestions on caring for dogs while you’re on holidays? We’re passionate dog people so would love to hear from you… leave a note in the comments below.