There’s been a little heatwave in London over the past few days, and evidently those who have suffered most have been commuters on the trains (especially those on the Tube – it’s sweltering down there, I can vouch for that much)! Many reading this new ‘Alight Here’ blog series might even scoff at my poor timing on writing about all the trains (and stops) throughout London because right now no-one wants to actually be on a train; but fret not, to put your minds at ease I’ve placed a special commemorative photo below – am sure it won’t be too long until it’s nice and brisk here again! ~ducks head as English co-workers hurl heavy books in this general direction – you see, they love the heat, I dread it… but that’s another story entirely ~…

While it might be unusual for any other traveller to feature an editorial on Croydon, it would be remiss of me as an individual to exclude it from my series on significant train stations/locations around London. Much of my working London life has revolved around ‘alighting’ at East Croydon (15-minutes from Victoria Station on the Southern Line, pictured below following winter snow fall) and West Croydon (about 45-minutes from Haggerston on the London Overground) stations. Croydon is located on the natural transport corridor between London and England’s south coast (hence, Southern Train service from Victoria heading to lovely destinations such as Brighton), and historically it was from Croydon to Wandsworth where the world’s first public horse-drawn railway ran (launched 1803), facilitating Croydon’s growth as a commuter town for the entire region. Train trips through the south towards Croydon are brimming with views of rows upon rows of old London homes, many pubs and local high streets, and large parks where I’d envy from afar those out for their early morning dog-walks. Croydon Town Centre itself (situated between the East and West train stations) was developed to its present (and rather busy) state from the mid 20th century. I suppose it would be considered ‘small’ by London terms, but the amusing thing (to me) is, the mall has a feel distinctly like that of the Queen Street Mall in Brisbane – centre of Queensland’s capital city, and a major shopping destination for locals from all around the south-east! 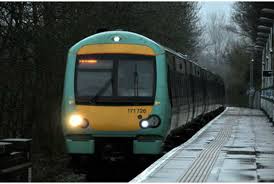 Probably not somewhere you’d end up as a tourist, but definitely a nice spot with friendly people, and great shopping (without the London high street crowds, I might add). Sentimental to me because it’s where I first trudged to work in snow (a novelty for me), where I enjoyed many a warm Starbucks latte on cold winter mornings, where I’ve learned some brilliant skills in PR (plus honed my tea making prowess), and where I’ve laughed with new friends – Wendy, Nick, Nicola, Tania, Kerry, Audrey, Lotte, Amy (and even newer friends as of very recently, Paloma, Jess and Rebecca) – along the way. S x