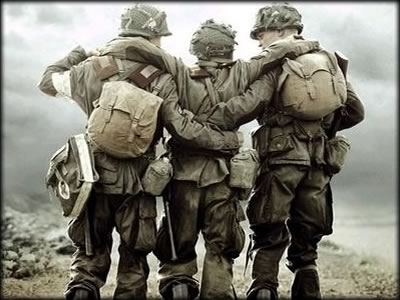 And an extra special prize because we thought this entry was, well, extra special! We recently hosted an Australia-wide search for writing talent and received an extraordinary response. Students submitted entries based around a theme, “inspire”, and this week we’ve showcased the final six winners, however, there was one additional entry that we really enjoyed, and while every piece we received was excellent, we felt compelled to also publish this one:

Show your support for our winners’ efforts by leaving a comment and sharing their amazing entries on your social media profiles for a few well-deserved likes.

When I was about to die, I thought of King Henry the Fifth’s speech, written by Shakespeare. With hindsight, it seems stupid, but those words were the most clarifying I have ever known.

Lying face-down in a ditch, ready for a stray bullet to plunge into my body, a dead friend lying next to me; ice-cold terror gripped at my heart. I was oblivious to the overwhelming enemy gunfire or the screaming of pain from somewhere nearby. But Graham’s eyes pulled me out of the trance just before I was dunked head-first into shock. His eyes should have been green, but in the shadow of the ditch, the blood frozen in his veins, they had turned ocean-blue.

I wasn’t aware I started to cry until much later, but the tears must have pulled me out of my trance. I could hear the roars of the machineguns, and the barks of nearby assault-rifles. To my right were two soldiers behind a rock. Doc was crouching over Macillan, doing his best to patch up the wounds. Macillan was screaming in pain, his sobs piercing my ears. I looked left, past Graham’s body. There were three other guys behind a destroyed car. They were attempting to return fire on the machine-gun nest, to no avail.

I tried to build up my courage to help my squad. I closed my eyes, trying to shut out my heart, which seemed to have taken a jackhammer to my ribcage. I tried to control my breathing, which seemed to be catching onto something in my throat. I felt a warm tear roll down my cheek.

I suppose that’s what hopelessness feels like. I had to do something. Anything. I opened my eyes, and looked into Graham’s blue ones.

“We few, we happy few, we band of brothers”

I gritted my teeth, suddenly furious. And pushed myself off the ground.

“For he to-day that sheds his blood with me”

My gun was in my hands, blood pumping in my ears. I faced the enemy positions head-on, fearless.

“Shall be my brother; be he ne’er so vile”

I could see the bright muzzle flashes from the windows of the huts. I stepped out of the ditch, breaking into a sprint.

“This day shall gentle his condition”

My boots pounded the grass, enemy guns turned to face me. My team watched in utter astonishment as I charged the machine-gun nest.

“And gentlemen in England now a-bed”

I pulled the trigger as I ran, feeling the recoil of every round against my shoulder. Enemy bullets whipped past me harmlessly.

“Shall think themselves accurs’d they were not here”

I grabbed a grenade from my belt, still firing my rifle one-handed. With one fluid movement, I pulled the pin from it.

“And hold their manhoods cheap whiles any speak”

I roared out loud, and threw the grenade with all my might, the explosive arcing over the battle, straight into the enemy machine-gun nest.

“That fought with us upon Saint Crispin’s day”

Patrick, we love this! You’re a talented storyteller and we’re forwarding you a prize to encourage you along the path to your dream career. Keep up the terrific work!

This competition was brought to you by Sugoi Media, Media Bootcamp, Get it Magazine, Get it Media, TravelLiveLearn.com, Hot Tamale Media Australia Pty Ltd