I had a sneaking suspicion that I’d like beautiful Barcelona. All of our friends in London have maintained for a while now that we’d like the place; additionally we’ve been attempting to learn Spanish on and off since late last year. I suppose Spain has always been of interest to me, so it’s been amazing to actually visit. Evidently we’re not alone in maintaining a fascination with the country – tourism is a critical industry and more tourists visit annually than the actual population of the nation!

While I’d love to explore the rest of Spain because I believe there are many more beautiful and exciting pockets to discover within the country itself, and despite us really only encountering an ‘overview’ of Barcelona, our general consensus is – we love it here! I’d love to return to Prague or Rome, but Barcelona is one of those places we could live in. It’s one of our new ‘cool’ cities, like New York, Tokyo, London or Vancouver. Barcelona has a nice energy – like London, but without the hectic pace. Our time here has been sunny, brimming with friendly people speaking in their seductive native tongue, delicious food, fabulous neighbourhoods with interesting architecture, sculpture and modern art, chic shopping, beautiful beaches lined with sexy bars and restaurants (like the Carpe Diem Lounge Bar, pictured below, where we enjoyed a cocktail last night with Leann and Evan), and even a fabulous dog park opposite our (very comfortable) Ibis hotel. It’s all here! Two days in Barcelona hasn’t been long enough for Cooper and I, but we felt that we utilised our first free day (yesterday) pretty well by purchasing a hop-on-hop-off Barcelona Bus Turistic pass (buy online for a 10% discount) which cruises around the city on three separate routes and offers a value-for-money guided overview of each neighbourhood, history and attractions.

Temperatures have been a little down from Italy (thank God) so the open-top view from the bus was enjoyable as we snapped photos of the city under the sun. There are more attractions here than I can even begin to name in this post (and unfortunately many more than we could actually visit in two days) but at least we managed to learn about and see many of the city’s gorgeous medieval cathedrals, Olympic stadium and arenas from 1992’s set-up (an image at end of post), Barcelona football club’s headquarters (and thousands of fans gearing up for the game that was being played last night), precincts down by the marina, and of course many enthralling sculptures and architectural wonders that Barcelona is renowned for. 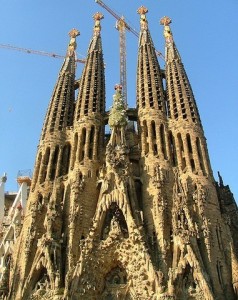 In particular, the works of Antoni Gaudi dominate the city which, whilst being both modern and cosmopolitan in nature, boasts a rich history in architecture and the arts. In spite of fascinating Romanesque and Renaissance period buildings, it is Gaudi’s ‘Modernisme’ and structures like the stunning (yet unfinished) ‘Sagrada Familia‘ (pictured above) which attracts millions of visitors to Barcelona each year and is of interest to even the likes of me (and I know nothing about design or architecture, although I can appreciate that which is innovative and pleasing to the eye).

There’s an aquarium and a zoo here, famous shopping and people-watching mall La Rambla, and as mentioned, a simply divine strip of clubs and restaurants (including a popular ‘Ice Bar’ (even the cups and candle-holders are made of ice, as Leann and Evan discovered, pictured below)) by the beach and casino (off Ciutadella Vila Olimpica train stop). The transport network here is efficient and inexpensive, at just €11 for a two-day pass, or about €8 for a multi-trip pass. 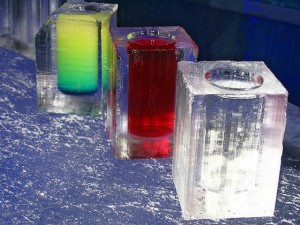 There is something for everyone in this loveable Spanish city – art, design, beaches, shopping, music, food (glorious food – our fabulous ‘lunch’ image above – a €9 authentic buffet in the Gothic Quarter, but we’ve also indulged in tapas and paella of which you can find many restaurants, particularly along La Rambla), history (modern and ancient) and of course, sport.

For anyone landing here during a football (soccer) game, try your luck at the ground’s box-office for tickets – do not buy from sellers in the street as your tickets are likely to be fake. 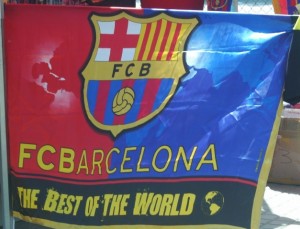 On the note of ‘warnings’ – Barcelona is renowned for pick-pockets and thieves. While we didn’t encounter any problems, some travellers we know did. Keep belongings with you/in sight at ALL times (on the town, in hotel reception, at train stations etc.); and also when you are leaving your bus/hotel/belongings always ensure you are carrying a credit card and cash as well as phone and/or contact numbers for emergencies in the event you are separated from friends/tours/in the face of any kind of trouble or unforseen situation.

A phrase book can come in handy in Barcelona, although mostly we got by with a few key words/sentences and some enthusiastic acting.

Leave time for exploring this city, and it’s probably a good idea to research what you would like to see before you get here, and/or enlist the services of a tour such as the Bus Turistic option so that you have the opportunity to become acquainted with where everything is located and how it all fits into the grand scheme of things: circle points on your map, then follow the train loops and live it up with the gorgeous locals.

I’ve just discovered that Susan on our Expat Explore bus found an amazing €15 sailing deal – one and a half glorious hours out on the ocean off Barcelona, with live music included! Definitely one to look out for next time around. If you’re a fellow Expat Explorer or fan of this city and want to list your fabulous Barcelona finds/tips for other travellers, simply ‘comment’ below.