We departed Rome early yesterday morning, headed in the direction of Florence. Fittingly, we watched Gladiator on the way, which was cool because it is now much more relatable after seeing Rome’s living history first-hand. Sadly though, we left a few of our troupes behind – Sarah, Julio, Martin, Gayle – who are heading back to their respective homes and work; but not before many hugs from all of us, because we have in the past two weeks become friends. We’re happy to welcome some new faces though – Salli (currently lives in Yorkshire), Grace and Caroline (Colombian mother and daughter team), Rosa and Phil (Aussies in London), Isaac (yet another Aussie) and Mike. 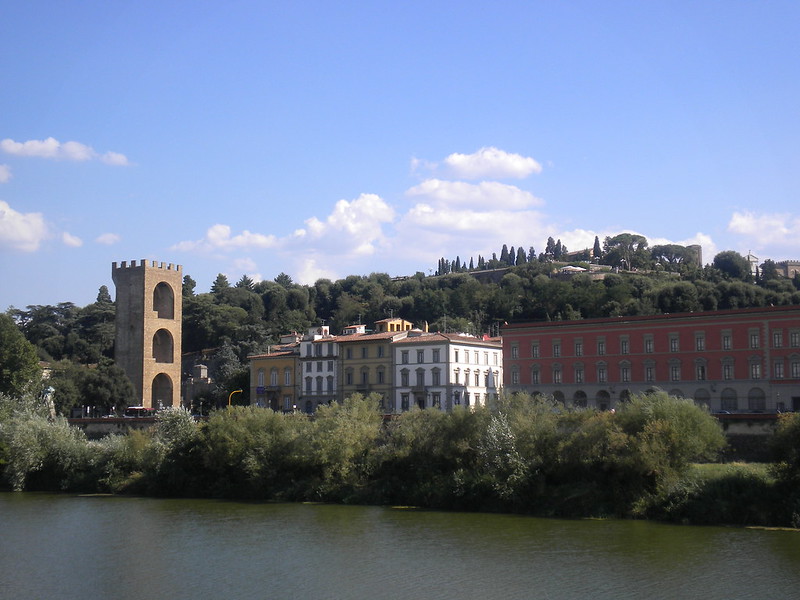 The teen in me who used to love an obscure Sandra Bullock RomCom, While You Were Sleeping, was excited to finally visit Florence (fellow school-friends will understand the reference). I didn’t really have much of an idea of what to expect, although I figured it must be relatively charming and quaint, as I’ve found most of Italy to be.

Despite an equally charming 43-degree-heat day to contend with, I must say I was pleasantly surprised by this gorgeous town which, did you know, was actually the capital of Italy for a small period between 1865-1871? Florence is associated with the likes of the Medici family, Michelangelo, art and the Renaissance in general; leather, and a fabulous strip of jewellery shops located along the famous Ponte Vecchio Bridge. The Basilica di Santa Maria del Fiore (one of the very biggest cathedrals in Europe) is magnificent – it now rivals Notre Dame in Paris as my favourite religious house in Europe). Unlike most I’ve seen on the continent, it is quite colourful, rather than the usual’grey/black’ stone.

The city of Florence lies on the River Arno and is renowned for history, its importance in the Middle Ages and in the Renaissance. Florence is pretty, and a fantastic spot to explore for art, architecture and its rich cultural heritage. A centre of medieval European trade and finance and one of the wealthiest cities of its time, Florence is considered the birthplace of the Renaissance and is also often referred to as the Athens of the Middle Ages. Shopping is a prevalent pastime for any visitor, and if you’re keen, why not do as many of our group did and take a tour of one of the famous local leather factories.

We stayed at a campsite that was a little out of the city, nestled in the enchanting Tuscan Hills. Our campsite was well equipped with an array of facilities and we even happened across a free local wine-tasting! If you’re seeking a little bit of luxury closer to town though, the Hotel degli Orafi was pointed out to me as potentially being an indulgent and convenient option.

This morning we departed for the famous Italian town of Pisa so we could all snap some images with its most poplar building. I didn’t know that the Leaning Tower is one of several beautiful structures in the area, which the locals had built during a ‘boom time’ long ago. The Tower of Pisa leans sideways because it was built (from around 1173) on unstable soil, and it was only in the 1990s that modern technology allowed for the structure to be reliably stabilised again so that visitors may continue to flock to its site.

The stop is necessary but it’s unlikely you’ll want to spend days in the town. Aside from some sensational photo opportunities, it’s also a nice place to buy some last-minute souvenirs like shirts, bags, leather goods and our old favourite, magnets. Many counterfeit goods line these streets, which is fine if you’re so inclined; but be aware of buying from street salesmen who loiter around the tour buses – in this area the buyer can be fined for purchasing from them. Stick to the ‘official’ stalls in town because it is fine to buy from them. I did pick up a cheap bag, but the strap broke an hour later. That is all.

Travel tip: In these towns (and any in Europe, I’d suggest) be sure to buy gifts, souvenirs, coffees and food away from the centre of the action. We’ve ‘tried and tested’ the theory over and over and prices are literally halved if you can find streets even just a few minutes walk from key landmarks.

Half way through the tour now, and the south of France is next on the agenda. Everything has been quite fabulous so far. Some tour advice I suppose I should impart is on ‘food choices’. Generally meal options on the Expat Explore stops consist of meat and fries/potatoes, or vegetarian options have been salads, risotto and pizza once, so choose according to your preferences (you have to make one choice, pre-departure, which you stick with for the trip).

On that note (and with Italian food always on my mind) I realise that unfortunately this is all our time in Italy for the this year. I’m quite sad to not see more but I’ve added further adventures in this country to my future list of ‘to dos’. I’ve found the culture and countryside completely wonderful, and I particularly liked trying to speak a few of their beautiful words here and there. Ciao for now.