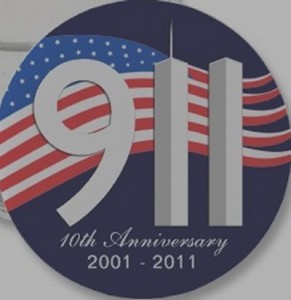 While I am on holidays in Scotland at the moment (and having a brilliant time, as always, with fab family up in this beautiful part of the world) it would be remiss to not make a mention of today’s date. Like most, I distinctly remember the events of September 11, 2001 – vividly – and I certainly hope to never see anything like it again.

Ten years ago on this date, Cooper and I were hosting our radio breakfast show in northern New South Wales. Usually the mood would be upbeat and fun, but this particular morning we went into work with chills running down our spines. We’d been called in earlier than usual, with a phone message that had said, ‘You need to come into work, America has been bombed’. We promptly turned on our television to see the horrific images of a plane being crashed into the twin towers (World Trade Center) in New York City. Not long afterwards another plane crashed through the second tower – and as we know it just got worse from there.

The crazy thing was that the evening before, we had watched a show that we’d taped a week or so prior – the lesser-known cousin of The X-Files – a Chris Carter spin-off starring The Lone Gunmen from the original X-Files series. This particular episode had focussed on a conspiracy to fly a plane into the twin towers, however in true Hollywood form the Gunmen saved the day and all was well. The next morning though, we woke up to find that it was not at all well. We’ll never forget this prophetic experience. Evidently there are numerous conspiracy theories surrounding this episode and its meaning (and the mention is even included in the Wiki link attached above); the storyline was indeed written six months earlier – scary as hell to wake up and find it had happened in real life however.

The following hours proved distressing for millions of people around the world – whether you knew someone in the vicinity, or were shedding tears for those captured in heartbreaking scenes on the television; or for those working tirelessly to secure other potential worldwide targets. We were a small team covering the news that day and I remember it was difficult to know what to say – where was the world going from here? The images were unbelievable, and the concept that people could conceive of such a plan was also incredibly upsetting to me. To be honest, I still turn away from the pictures of that devastation.

Yesterday I read a story in UK’s Closer magazine on a woman who managed to escape the twin towers. She said she and her friends were just chatting that morning but all of a sudden noticed lights of the plane heading towards them all at speed. There was silence as it all seemingly happened in slow motion. Everyone tried to get down the stairs, but as the spaces filled up with more and more people trying to escape, it became increasingly obvious that some wouldn’t make it. Despite this, she said everyone tried to remain calm, and anyone who was hurt was let through first. She made mention of the firefighters too – as everyone else ran down the stairs, they were running up and into the building. Isn’t that just so sad.

We were in New York earlier this year and were astonished at how vast the area that was destroyed is. The good people there are slowly rebuilding, but it is hard to get on with it and over tragedy when each year there are such public reminders of what they have had to go through. And of course today, ever more (disgusting) terror threats. Today America is remembering, and no doubt it is a very difficult time for all – it’s sad enough being on the outside and looking in – well, for me it is anyway, because I have amazing friends who are American and some of the most helpful, kindest people I’ve met in my life are from there. Can’t believe it has been ten years. I do hope we don’t have to live through something like this again. Here’s to peace in our lives – sooner rather than later.