Sad to leave Barcelona this morning, but excited about our next leg of the journey – Switzerland shortly, and today a stop by the intriguing 2000-year-old Pont du Gard aqueduct, as well as the gorgeous Medieval town of Avignon (France, pictured above).

The Pont du Gard is part of the Roman aqueduct of Nimes, built around the years 50AD in order to carry water 50km on a ‘downwards’ angle to the city, and used up until the 6th Century. The structure is remarkable, built beautifully; it is technologically advanced even by today’s standards – considering no computers were used to engineer the bridge. Take a camera as well as your swimmers – the waterhole underneath this cool Roman construction is perfect for a dip, or even canoeing. Perhaps take a packed lunch though – the restaurant is expensive and the cafeteria wasn’t overflowing with fresh options. 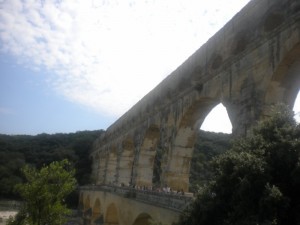 Not too far up the road is a spot so pretty that evidently Brad and Angelina own a ‘house’ nearby (probably more of a personal hotel than a house, but you get the idea). Avignon (one of the major cities of Provence (Southern France), and located on the banks of the Rhône river) is surrounded by an old Roman wall, and the city maintains a romantic medieval charm.

Avignon’s claim to fame is that it was the city to which the Popes fled when leaving the corruption of Rome in the 14th century. The palace they built, ‘Le Palais des Papes,’ or the Palace of Popes (pictured below), is the world’s largest Gothic edifice. It was largely emptied over the centuries but now serves as a museum and is an imposing building within the city walls. 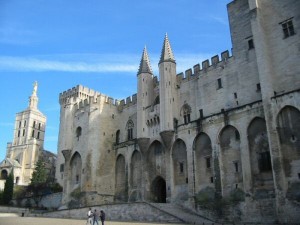 It is estimated that about 200,000 people live in Avignon, 16,000 of which live ‘intra-muros,’ or within the ramparts built in the 14th century. The city is now sprinkled with buildings and monuments ranging from the new to the old, the very old, and the ageless, and offers a delightful array of shops, pubs, restaurants, cafes and alfresco dining options typical of cute French towns in the area. We are staying at another Ibis which is ideally located within walking distance of the town, and is once again a comfortable, clean place to rest until tomorrow morning’s early start.