I’m sure it must say about me somewhere on the web that if you send me a press story on baby orangutans then of course I’m going to run it! I’d love to visit Borneo, Indonesia, for a number of reasons, and the work of The Orangutan Project is certainly near the top of those reasons.

The young orangutans at the center were previously kept in smaller enclosures where they were rehabilitated and cared for until they were deemed suitable for their release into the wild. Thanks to the new open enclosure, they now have more space to play, grow and interact in a place that simulates their natural environment. The first 20 orangutans have now been moved into the ‘New Baby’ enclosure. They all did extremely well, and evidently love their new home. The enclosure is the perfect place for the young orangutans (between the ages of 1-4 years) to learn how to survive in the wild when the time comes and they are ready to be released. 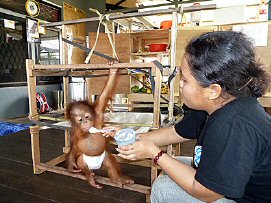 Cocks, President and Founder of The Orangutan Project, “these young orangutans that are being rehabilitated now have the freedom to roam in the trees, play with other orangutans and learn how to live in their natural environment, while remaining safe and under the close watch of their human carers.”

The enclosure will allow for the young orangutans to develop nest-building skills that will help them survive in the wild. When the first 20 orangutans were introduced to the new enclosure, one young orangutan that was just 3 years old made a nest for the first night, and slept outside in the forest enclosure.

The Ketapang Rescue Center is for the rescue, rehabilitation and relocation of orangutans that have lost their forest habitat to make way for destructive palm oil plantations in West Kalimantan, Borneo. The center is being built to house 100 rescued orangutans, treating any injuries and providing a safe and healthy environment for them, until they are ready to be released back into protected areas of forest.