Back in the Big Apple

I remember the opening scenes of Michael Moore’s Fahrenheit 911: A black screen, silence, then a massive explosion. The picture opens up as another plane flies through the World Trade Centre – silence but for that terrifying image. I had to turn it off because it was upsetting. To see something that terrible in my lifetime was sad (still is). I remember watching on television, seeing smoke, ash and debris flying through the Manhattan streets that I’d briefly visited. Brief, but like anyone who has been to New York would say, life changing. The colour, lights, people, energy, opportunity… the Big Apple was exciting and wonderful to me in 2000. We’ve seen some purely awful things recently in the form of natural disasters Mother Nature has cast upon us – heartbreaking but part of our world. What I never understood was why people could devise such events as 9/11, to attack other people, who had welcomed them into their home, their city.

Arriving back to New York yesterday we struck up conversation with our very local shuttle-bus driver. We had just turned down by The Hudson River, heading towards the Financial District in Manhattan where we are staying, when he asked if we’d been to the city before. It’s Cooper’s first visit to the city, but as I answered that I’d been here briefly just over ten years before, he said, “so before the Twin Towers were hit” – ie. the day that changed the world as we knew it.

As we chatted a little further we drove up alongside a vast area that is under construction, similar scenes to any other big city in the world. This area he pointed out was different though – “that’s Ground Zero” our driver told us, “I was on the other side of the river there when that first plane hit”.

Ten years on, that tragic day is evidently still very close to the people’s hearts here, understandably so. My brother saw Ground Zero about a year after 9/11 and he said he was humbled by the experience, seeing and feeling all that residual sadness in this block. Stopping and looking now, we too couldn’t help but fall into silence. Evidently the VERY LARGE space is being thoughtfully redeveloped into a series of buildings that will pay tribute to the lives lost within the space ten years ago.

The city that never sleeps has mostly moved on, and was certainly moving yesterday, regardless of the rain. We are staying at the Andaz Hyatt on Wall Street which is gorgeous – very chic, large rooms, complimentary everything! It’s also perfectly situated – the area itself is not as hectic as Broadway, is full of amenities including Pier 17 within walking distance which offers shops and restaurants, train stations and ferries. Today we will buy a Metro Card which offers similar services to your usual Oyster Card / city transport card options, and we’re about to head out on a fabulous Film & TV themed tour of NYC. 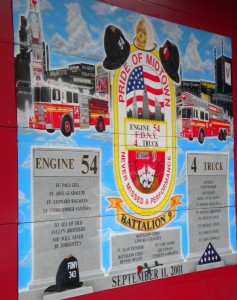